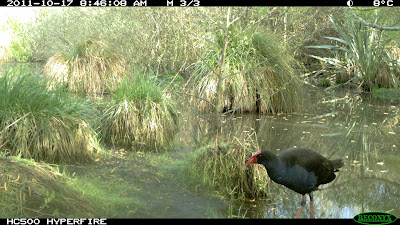 Another research interest of mine is wildlife management in urban environments, particularly in Christchurch New Zealand. Christchurch is a very flat city with very little relief in topography, apart from the subtle landforms associated with its many waterways. Other New Zealand cities (e.g. Auckland, Wellington and Dunedin) are blessed with hilly, often steep landscapes, and in these landforms remnants of native forest have been preserved; protected from pre European fires, protected from land clearance for agriculture on account of their inaccessibility or poor productive potential, and saved from urban development on account of the unsuitability of the landforms.
However Christchurch has no such forest remnants aside from Riccarton Bush; a c.7.5 hectare kahikatea (Dacrycarpus dacrydioides) dominated forest in the heart of the city. Therefore the only practical areas where significant native forest restoration can be carried out in the city is along the main waterway corridors; the Avon, Heathcote, Styx and Otukaikino Rivers and their many tributaries. Unfortunately the Avon and Heathcote Rivers offer only limited opportunity for significant areas of native forest and riparian restoration on account of the density and proximity of adjacent residentia, commercial and light industrial land use development (although significant scope may now exist on the lower Avon River as a result of the devastation caused by the >9500 earthquakes and aftershocks experienced since September 2010 Canterbury Earthquake).
Significant forest restoration has been carried out since the late 1970’s on the Otukaikino River, centred on The Groynes Reserve, however it is the Styx/Puharakekenui River that is now most at risk from the encroachment of urban and residential development. Developers are now more than ever wanting to develop close to the Styx River, and while such developments can have some positive outcome for biodiversity, often the effects are adverse in nature, and result in loss of natural character, disturbance and expatriation of wildlife populations, loss of fine scale habitat features such as large woody debris and decay cavities, and most significantly the loss of potential to establish significant and viable wildlife habitat for both wetland and forest wildlife.
One problem planners are faced with when it comes to advocating for appropriate waterway setbacks is not knowing what wildlife species occur at particular sites, as often species are cryptic or nocturnal and are therefore not easily detected by conventional inventories. Camera trapping with the use of motion and/or heat signature sensing remotely deployed cameras provides an opportunity to complement the current body of knowledge of species occurring in the cities more natural waterway areas, and provides a tool to advocate for the protection of natural character and appropriate waterway setbacks (in which significant habitat could be established) where rare or uncommon species are found to occur.
The images shown here include all the photographs taken over the first seven-day/night camera trapping inventory at one site on the Styx River at the Styx Living Laboratory Precinct (608 Marshland Road, Christchurch). Species photographed here are all native, and include pukeko, NZ shovler and grey teal. Although the species range was limited to three species only, it is hoped with each additional site sampled, more species will be present including more elusive species such as marsh crake, Australasian bittern and potentially even native bats.
Following my return to Christchurch at the end of 2012 I plan to set up a more comprehensive camera trapping inventory. In the meantime, as new and interesting images are captured they will be uploaded to the blog.
Posted by antony shadbolt at 12:58 AM 5 comments: 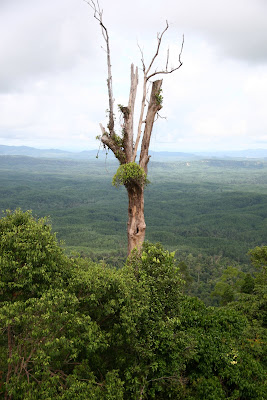 I am a landscape architect with the Christchurch City Council in Christchurch, New Zealand, and contract lecturer at Lincoln University. I specialise in ecological restoration and landscape planning based on the emerging discipline of landscape ecology.

Other than my role as a landscape architect, my main area of research is the sustainable conservation and management of wildlife in tropical timber plantations. My recently completed PhD research has seen me travelling to Sarawak, East Malaysia (on Borneo Island) once or twice a year since 2005, and in March this year I will be relocating to Kuching, Sarawak with my family for nine months where I am planning to continue with this work.

This blog (blogging being the first sign of madness) aims to keep folks back home up to date with what I'm getting up to on Borneo over the following months. More importantly it will be used to disseminate preliminary research findings, and as a tool for discussion on the research, and I invite anyone with an interest in the biodiversity of Borneo's forests to contribute.
Posted by antony shadbolt at 1:49 AM 1 comment: